Our contribution to The Liverpool Biennale 2002. Using two sack wagons as a means of transport we walked around in Liverpool and built/made improvements.

We went to Liverpool from the 12th to the 20th October 2002 to participate in the Liverpool Biennale, Independent Section. We bought a weight to make sure we could bring everything on the plane.

We had two sack waggons, and we used them to transport all our materials. We wanted to do daily projects within a longer stretch of time than we had normally done. None of us knew Liverpool so we had to use the first day to look around and see how things were. We arrived on a Saturday and immediately went for a walk: A wild nightlife took place before our eyes! E.g. it ought to be mentioned that Pelle saw a girl wearing a salmon-coloured bra.

Daily projects: Ideas are realized, at once. Things related to ”place”/”site” become of importance because decisions are made quickly and are realized quickly. The gap between the idea and its realization is shortened.
Some basic elements were of big importance for our activities: Our tools, our film-projector, and our generator. In Liverpool we were given a lot of left-over tree, and we also had a garage we could work in. We wanted to fulfil some specific functions and we had some things we were very keen on building, among others lamp posts and stairs. Apart from the tools we had brought with us from Denmark, we bought tools in Liverpool. As it is well known, England has a long and proud tradition for tools and craftsmanship.

As the first thing, we build a shed on Monday and we used it to present different things we made in Liverpool. When something had been made, we took a picture, printed it and hung it in the shed the following morning. The shed faced the street, and stood within a small recess. Perhaps the site wasn’t perfect, but to get started as quickly as possible had first priority.

To build a seesaw suddenly seemed very obvious. We build it in the garage and found a nice spot on the pedestrian street, where we put it up. One time it had to be repaired, but later it disappeared without leaving any traces!

Surprisingly enough, it showed out that Liverpool was a rather cozy city. It has a lot of space: In 1945 it had two million inhabitants, now it has approximately 1 million inhabitants. Before we went, we had been told it was a rough city, but we didn’t experience any of that.
There were many small recesses and alleys we could take care of. And strangely enough, many places/sites seemed very untried. To be in a foreign country gives you a more relaxed attitude towards building things in town. You don’t know the rules and therefore does not have to worry about which rule you break. That also makes it easier to make excuses.

We had found many good places for lamp posts, but chose this fine alley. We arrived at 6 p.m. and at 7.30 p.m. it was already dark. Here we sat with a couple of books and later Fish-n’-chips. The place was a bit gloomy so the effect of the light was extraordinary. Earlier we had met some students who now came by to look; later they were very friendly to help carrying the lampposts back.

While building the shed, passers-by reminded us not to expect that it would stay where it were. It showed out to be partly true. In the shed we had to benches, meant for graffiti-painters to sit down and have a rest. First one bench disappeared, we found it at another spot in town together with another piece of so called ”public furniture”.

Saturday morning the shed was painted over, without benches and our printed photos spread casually around. Luckily we had a
big bunch of printed photos in our bag and thus, once more, put up twice as many. That we the next day went back to Denmark is a good illustration of the weak position one has in such competitions.

Saturday evening we went on a film tour through town, and on our way we found different kinds of suitable spots. Because of the warning against thieves it seemed perfect to barricade ourselves and our film-projector inside one of the famous English telephone-boxes.

In Liverpool we also found coin-computers. At one of these computers, Ebbe re-borrowed a book from a Danish library (however, he still got fined for not having returned the book).
The supermarket Tesco is open 24hours a day. We became very intimate with Tesco, and with the people working there, we made an arrangement to show film at Tesco one evening.

Is it, in reality, only an advanced form of garbage you produce if you put up/out some thing in the world (e.g. in Liverpool) without permission? It has been built for others, and it is up to others to use it, but at the same time you thereby delegate a responsibility – that nobody have asked for. As an experiment it is very interesting to see what happens with the things you put up/out. But, of course, we do not mean to be a pestilence – that is not our intention.
A circle can be made, so that you yourself, as a creator, take care of the things left behind. These considerations are also important, if you want to see things from the viewers point of view – to see which things will disturb the picture. On one occasion we met a man who said that ”next to his shop a bench could be put up”. When we came and brought the bench, he immediately told us to put it up at another, specific place. Here we were spotted by a surveillance camera, but the guard took us to the caretaker of this place. With this man we arranged a spot for the bench (: meaning that we had to come and bring it with us again). About this episode a film will very soon be made!

Final remarks: The concept involving daily projects was tested on this trip to Liverpool. It showed out to be a good concept for at least one week. But at the same time we experienced that there were big differences as to the effect/usefulness of our constructions; even though we built almost the same things and the sites at a certain level were very similar. Every new situation also demands a new judgement. Daily projects are just as working-days; getting up, fixing photos and drawings from the projects of the previous day, and later on in the day making new projects – this made sense. 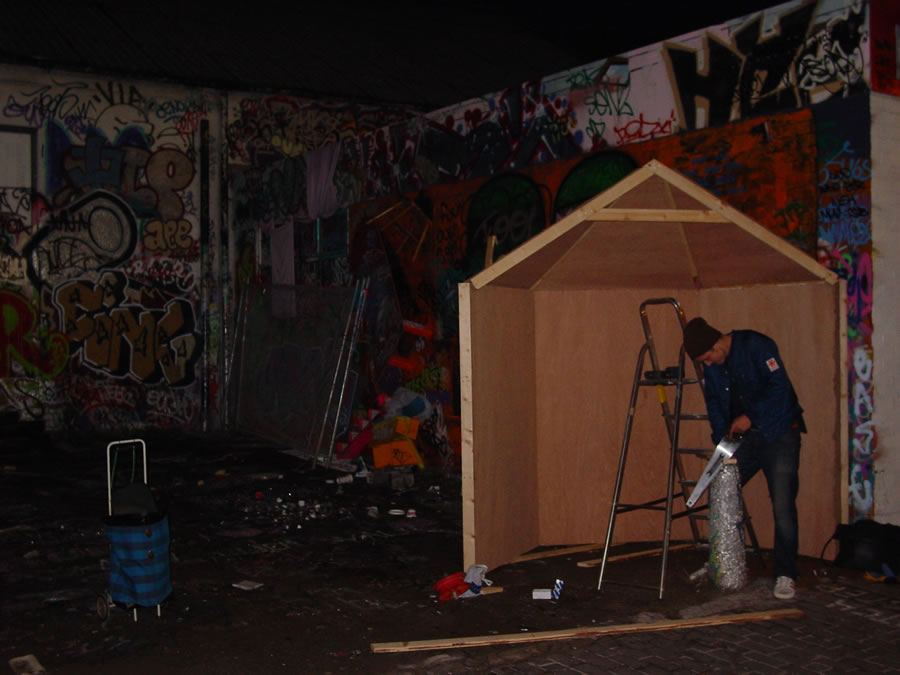 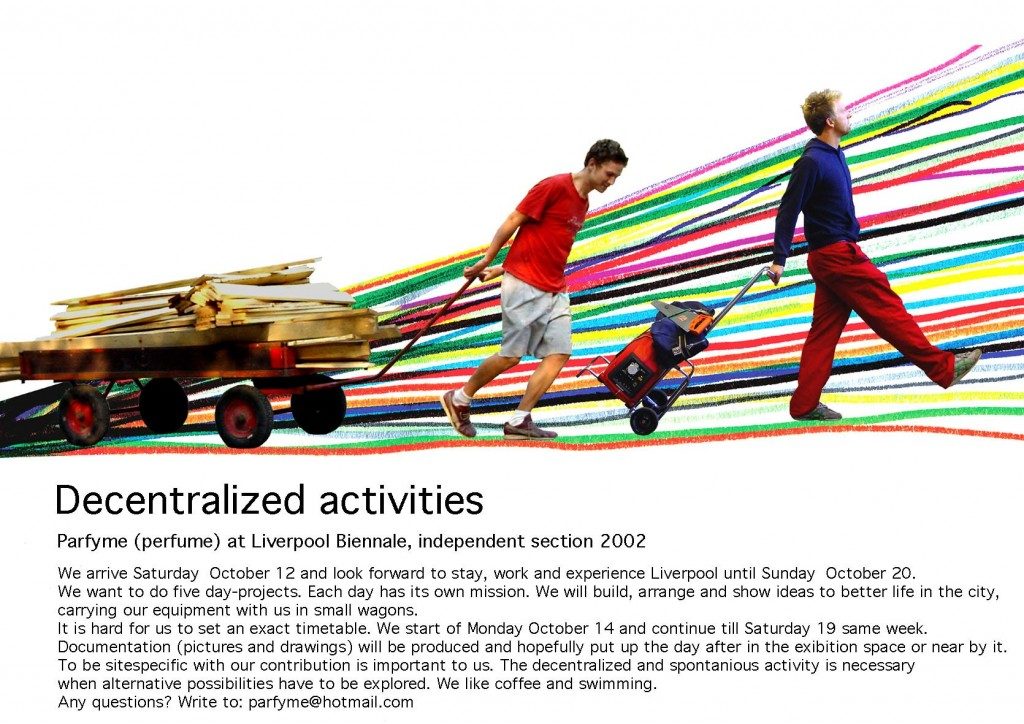 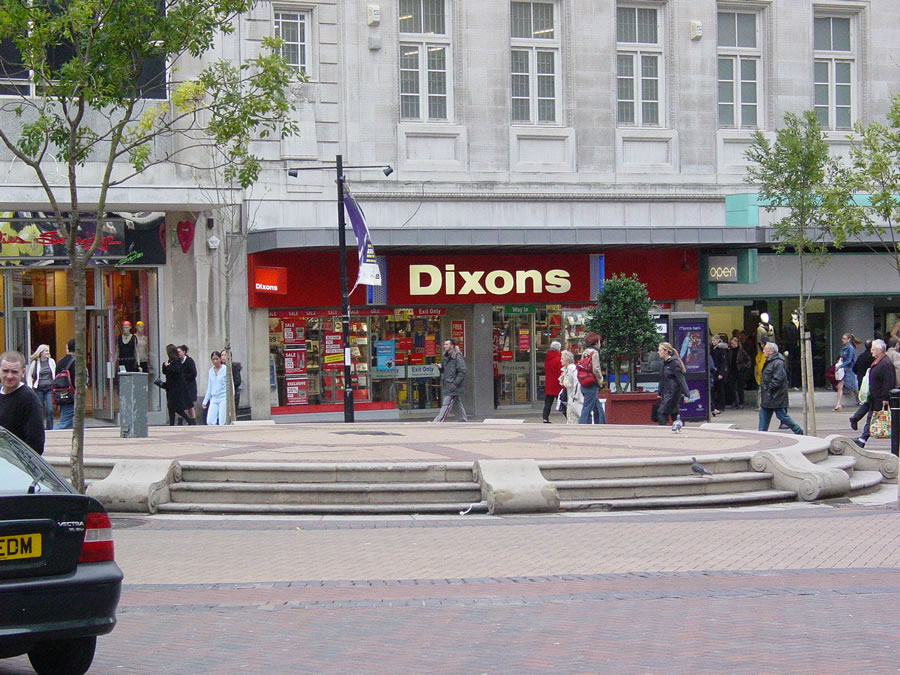 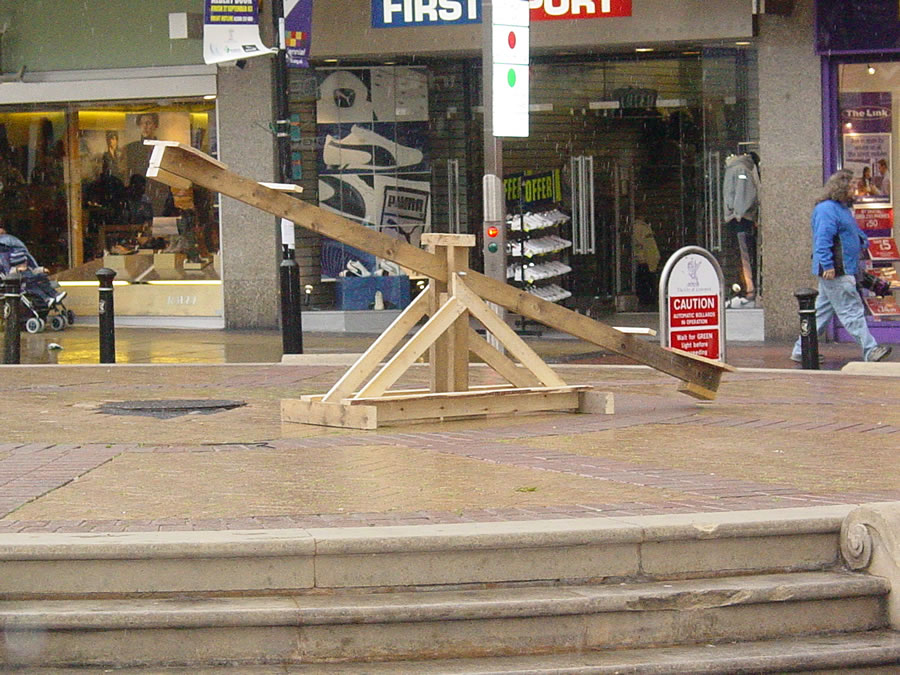 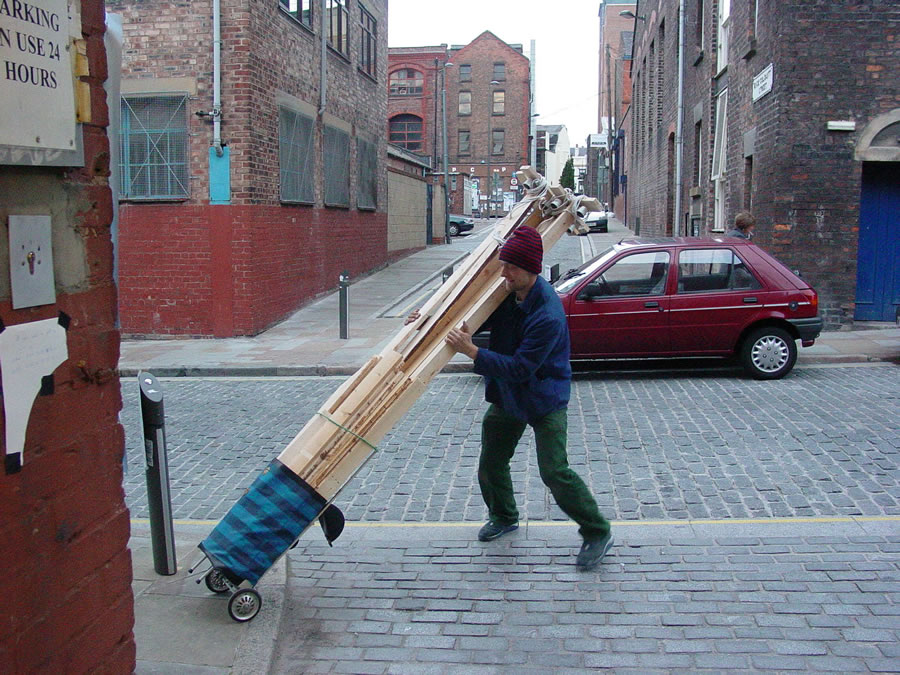 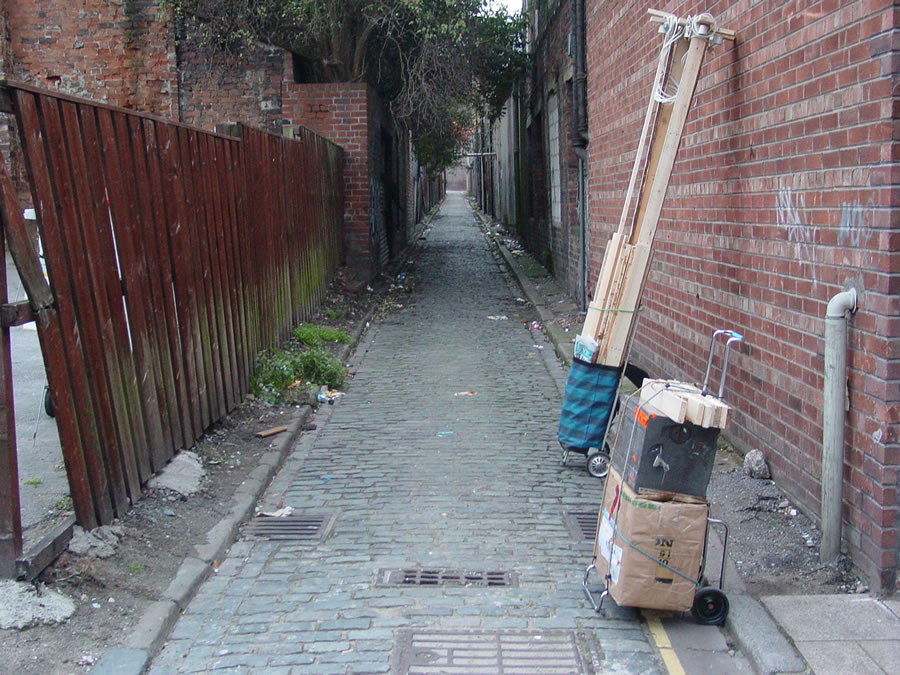 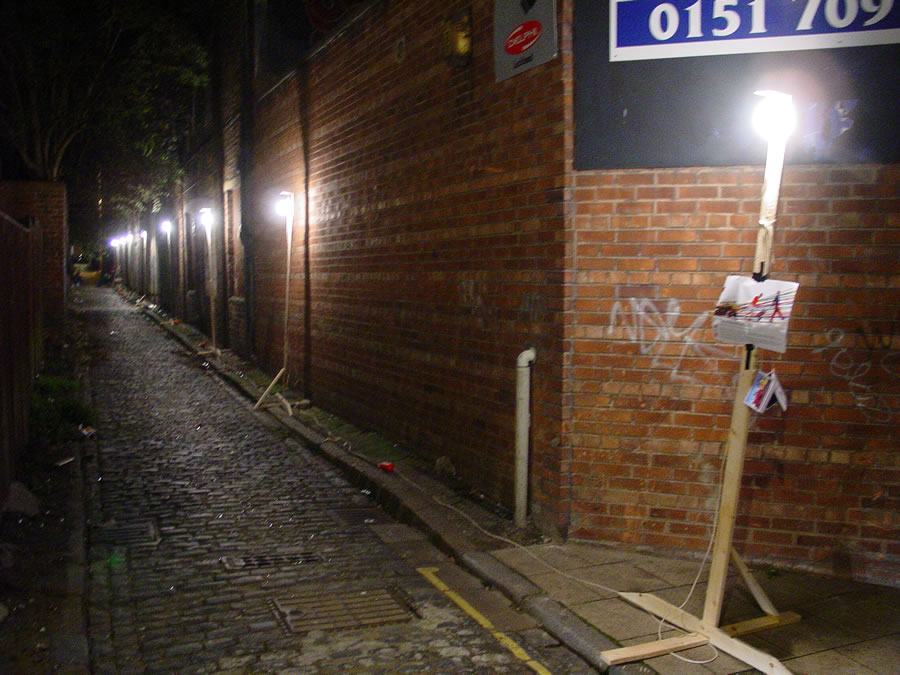 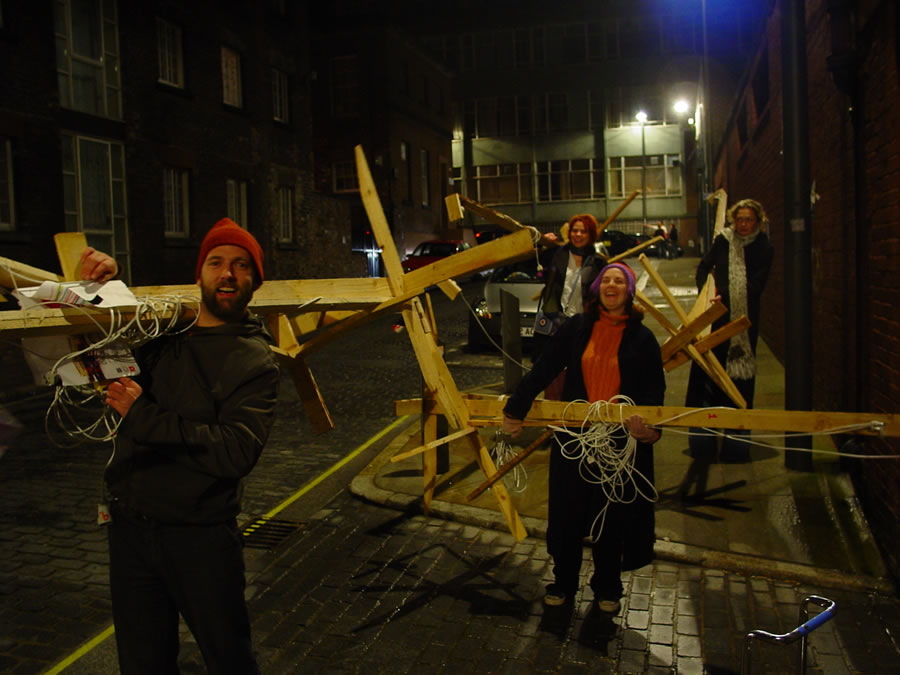 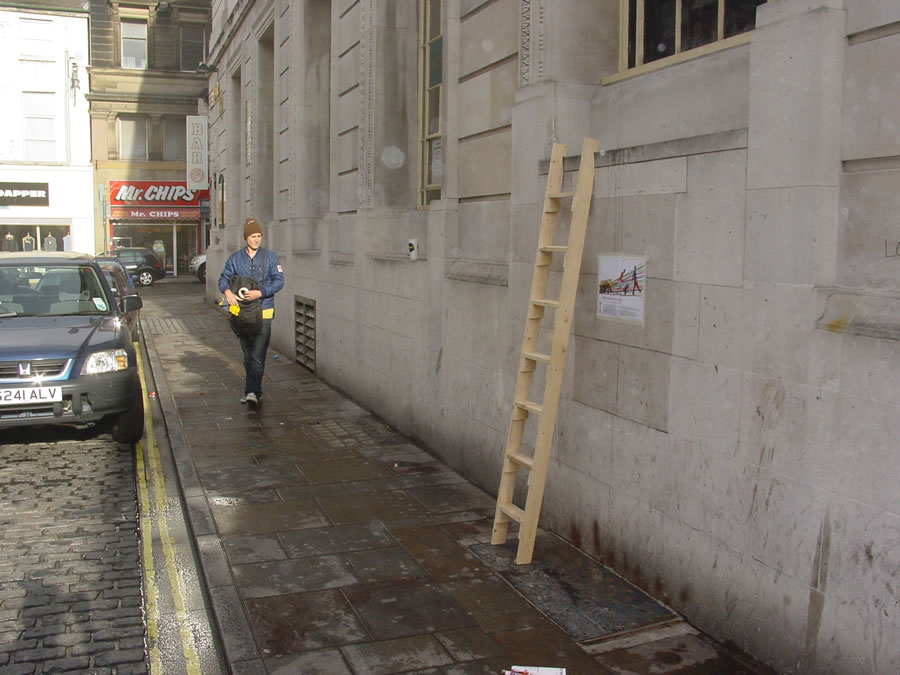 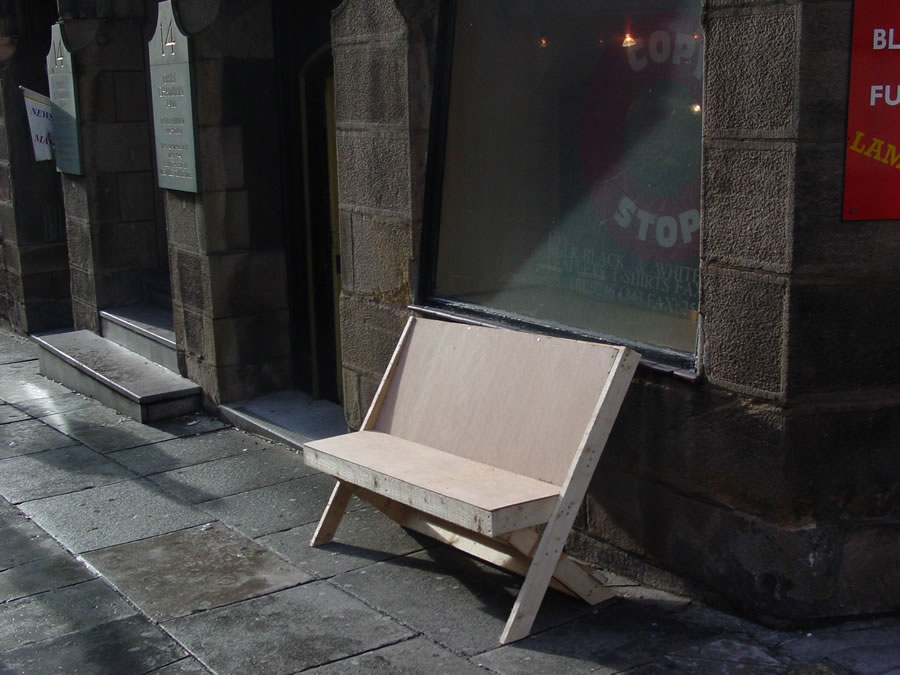 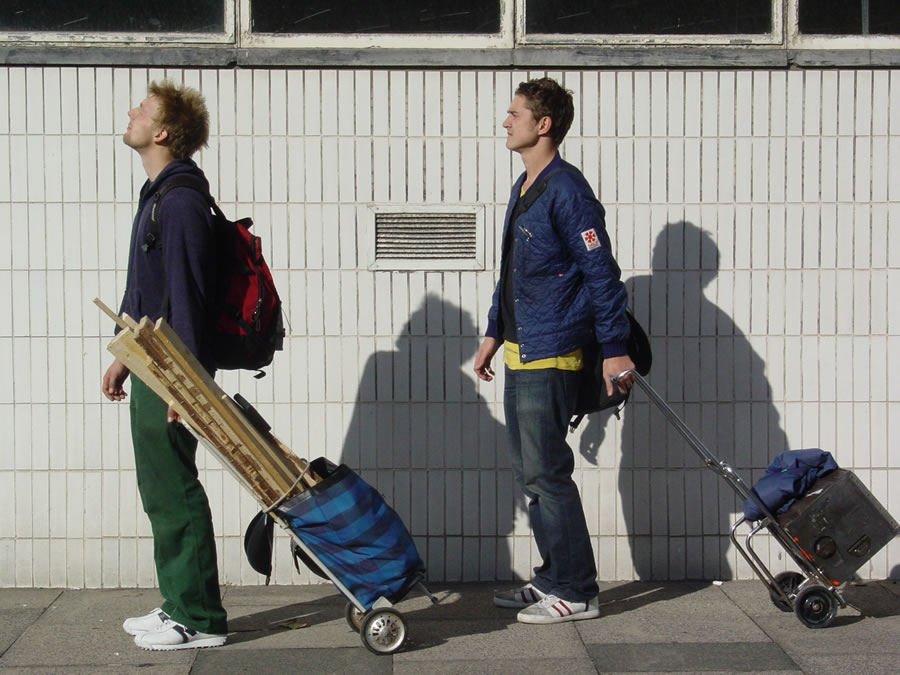 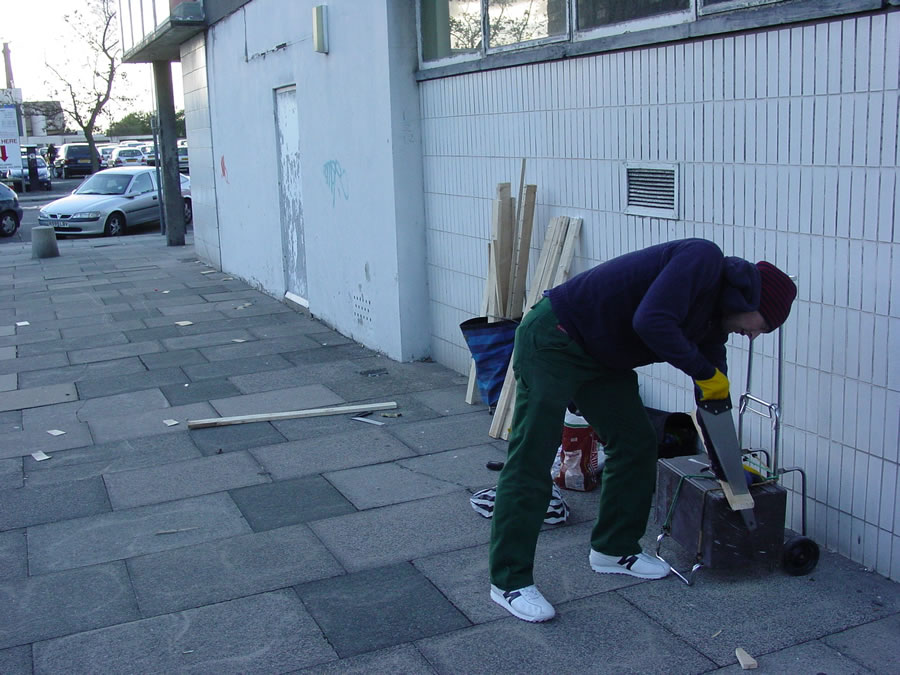 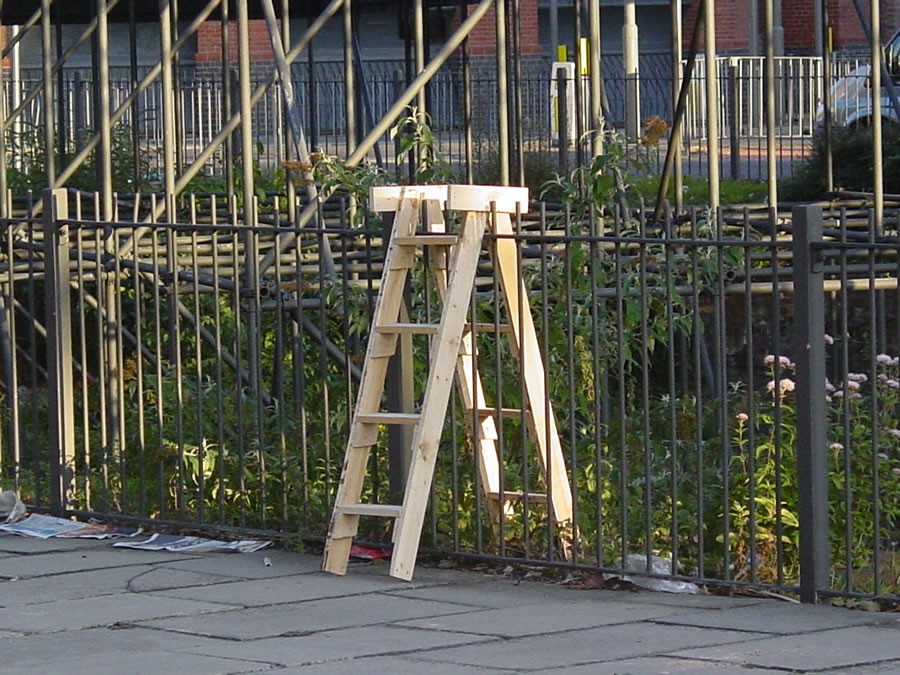 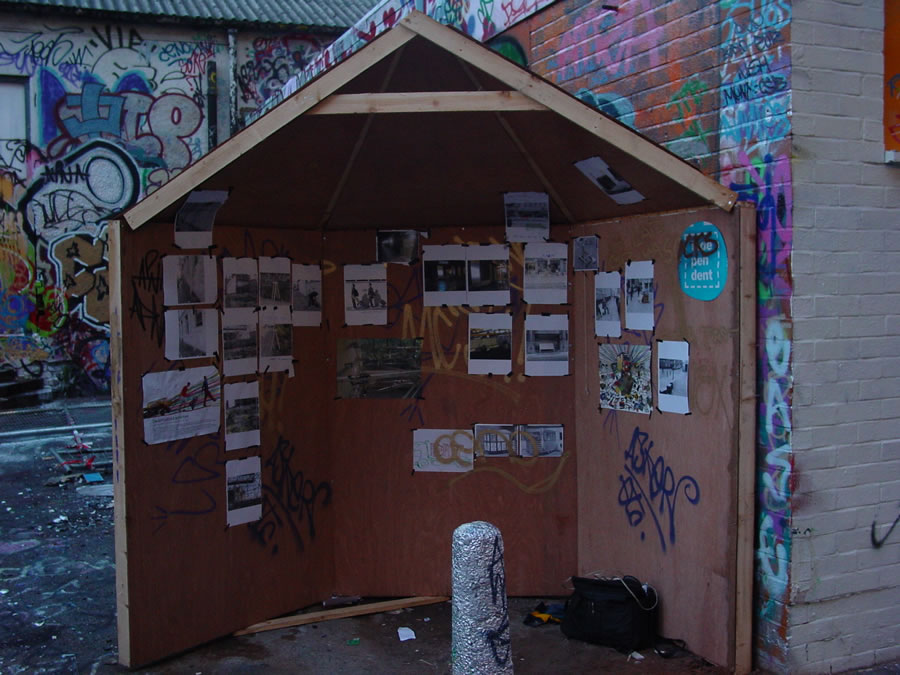